The objective to transform the EU into a zero net emissions of greenhouse gases in 2050 calls for several courses of action, affecting different elements of the society and the economy. One of the most important cornerstones is energy, given that is a cross-cutting issue affecting all fields of the human and economic activity. Strongly fossil fuel-based energy was responsible for almost 75% of the EU-27’s greenhouse gas emissions in 2018 . Thus, if we want to be successful in our adaptation to climate change and prevent further environmental degradation, the current fossil fuel-based energy model needs to shift towards the energy community paradigm.

In Spain, the National Energy and Climate Plan (NECP) establishes a global target of 23% emission reduction in greenhouse gas emission, with respect to 1990 values. More specifically, it sets a target of 74% renewable energy share in the electricity generation mix; a 39,5% of energy efficiency improvement, with respect to 2007 baseline; and 42% of renewable energy share in the final energy use. Consequently, the grid electricity will progressively become greener, buildings will gradually need less energy to operate, and such energy will be produced on-site by renewable energy sources. This scenario is where energy communities can provide great added value to the energy system, provided there is a widespread electrified demand. Assuming that the objectives for 2030 are reached in terms of building energy efficiency and renewable share in the electricity mix, the situation in terms of greenhouse gas emissions would be the one shown in Figure 1. 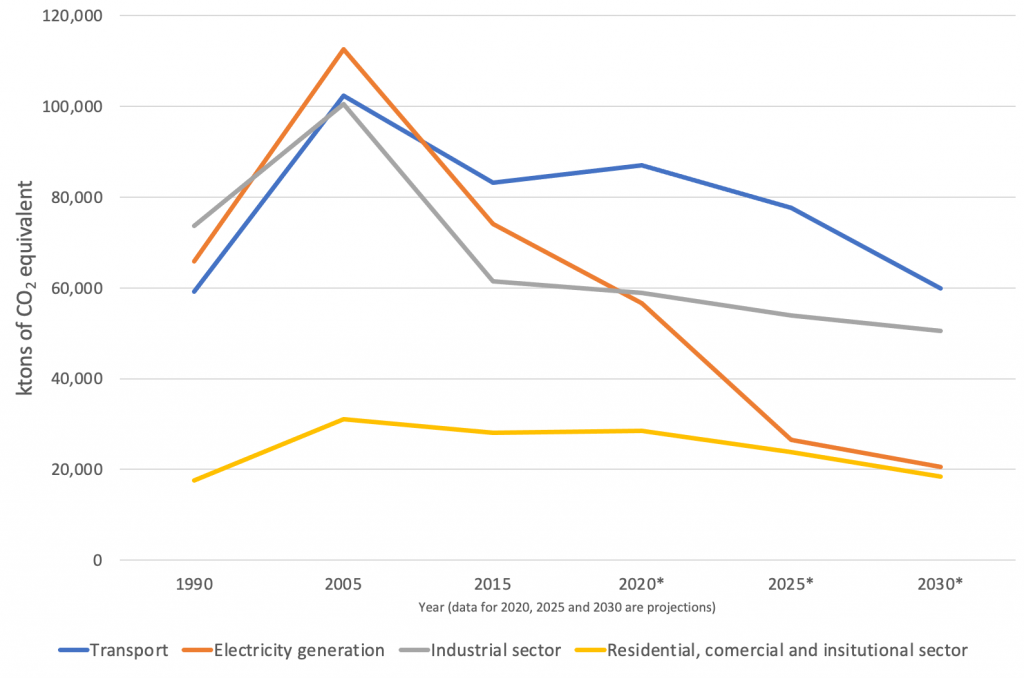 It can be seen that the electricity generation’s greenhouse gas emissions are expected to be drastically reduced. However, the same cannot be said for the residential, commercial and institutional sector. While the trend for renewable share in the electricity mix has already started, the needed massive building renovation is yet to occur. Furthermore, even if the ambitious targets are reached, the situation by 2030 would be that the impact in terms of greenhouse gas emissions of the electricity generation becomes as important as the building sector’s.

According to the Long-term Strategy for Energy Renovation in the Building Sector, in Spain around half of the final energy consumption in the residential sector is connected to the use of petroleum products and gas. This is due to the prominent presence of fossil-fuel based appliances and, primarily, fossil-fuel boilers. This has been historically favoured by the noteworthy presence of natural gas distribution in most urban environments in the country, and the traditionally lower prices of natural gas compared to electricity for residential end customers. Although zero marginal cost renewable penetration in the mix is quickly drawing a different landscape. In addition, there is a general lack of knowledge by the general public of high-efficiency electric equivalents for heat generation such as heat pumps. Hence, building owners hardly ever choose to voluntarily substitute an existing boiler by a heat pump or even by a electric water tank for sanitary hot water production, let alone fossil-fuel kitchen appliances such as stoves or ovens. Furthermore, usually when the existing fossil fuel-based equipment becomes obsolete, it is substituted by a new one. This practice hampers the electrification of buildings, blocking their digitalisation and the cost-effectiveness of energy communities. Therefore, a carrot-and-stick policy is needed. Financial support and communication campaigns, and restrictions for the new installation of fossil fuels in buildings.

In relation to the carrot, Spain’s NECP sets a 2030 target of renewing non-efficient existing thermal installations in residential buildings by high efficiency ones at an annual rate of 300.000 up to 2030. Also, during that period, a total of 1,2M dwellings should have their envelope renovated. That objective poses a significant challenge given the current yearly figure of 30.000 renovated dwellings. Therefore, private initiative is also needed to significantly affect the residential building stock, composed by more than 25M existing houses. With regards to the stick, the update of the Thermal Installations in Buildings Regulation (RITE, by its acronym in Spanish), mandates that any choice of thermal installation in both existing and new constructions must be justified and compared with high-efficiency, renewable, and/or residual energy-based alternatives. Nevertheless, the regulation, although preventing the straightforward substitution of fossil-fuel boilers, does not explicitly impede their installation. In addition, the existing policies do not regulate the installation of fossil-fuel kitchen appliances. Technology neutrality needs to disappear from building regulation.

In conclusion, the leveraging action towards meeting the climate targets is massive building electrification, because using electricity is a must towards integrating renewable generation, at building, district and grid level. It is the enabling step towards unlocking the whole potential of energy communities. For energy sovereignty, electrify!. To promote building digitalisation, electrify! To fight energy poverty, electrify! To mitigate climate change, electrify!

Leave a Reply Cancel reply
Subscribe to our newsletter