The primary challenge of the energy transition isn’t technological. Arguably, it isn’t even economic. Instead, it’s institutional. The reorganisation required to ditch fossil fuels and incorporate renewable resources reaches deep into the devilish details of how our societies operate.

I want to give you a glimpse of that complexity, by examining the EU’s attempts to empower communities, allowing citizens to take the improvement of their energy provisioning partly into their own hands and take part in the great transition towards a green grid.

Basically, even if you have a well-intentioned regulator (not a given), because of the speed of developments, the complexity of the digitalized renewable grid, and because of competing interests, it’s very easy to get this empowerment wrong and wind up with the opposite of what had you intended.

This post is partly informed by the Horizon2020 funded NRG2peers project, which tries to figure out how to, er, empower energy communities to participate in flexibility markets.

It’s primarily based though on two excellent reviews of recent legislative and legal developments in community energy by Josuah Roberts (2020) and Annalisa Savaresi (2019).

Many people pining for reliable, affordable and clean energy have pinned their hope on community ownership. That is: in theory, as energy generation is decentralising into smaller units of production, it should become easier for groups of citizens to ‘buy into’ the grid of the future and reap its benefits themselves – instead of being dependent on the big boys of the old central grid.

Indeed, in some countries like Denmark and Germany, communities did and do own quite a bit of small-scale energy generation capacity. However, we’ve also seen the big boyz take over their scene.

Moreover, the business case for small-scale renewable generation was relatively easy to make in the earlier phase of decentralization. All it needed was dwindling costs plus straightforward incentives like the feed-in-tariff, which guaranteed fairly quick returns on investment. But in the obsession (?) to create a “neutral” marketplace, though, EU regulators then banned ‘discriminatory’ policies like differential Feed-in-Tariffs. Unfortunately, power often parades as neutrality. And so it happened that this free market wound up working better for the big boyz.

With time though, and some gentle pressure from the cooperative movement, EU policy-makers realized the true and deep meaning of equality: 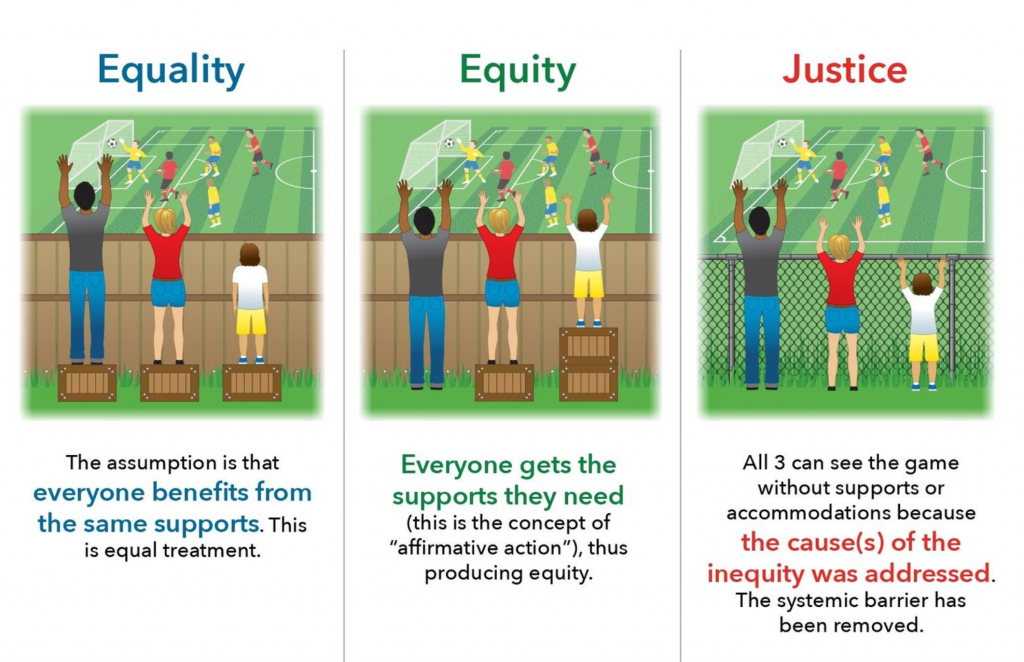 So, in two updates of its energy directives, it came around to a (sort of) positive discrimination approach, exhorting member countries to do their best to assist energy communities.

As Joshua Roberts points out, this where the hard part begins. Now that the EU formulated the legislative principles, member states have to adopt EU directives into national law, the so-called transposition process. Why is this the hard part? Well, governments often lack familiarity with ‘energy communities’, incumbent big boyz might resist, and the energy market is only becoming more complex.

Fortunately, in terms of the first two difficulties, based on assessments in NRG2peers we can be moderately optimistic. In their new legislation, the four participating countries (Italy, the Netherlands, Slovenia, and Spain) are sticking quite faithfully to the spirit – and even letter – of the directives.

That still leaves the complexity of the market. Because even if the principles are safely transposed, it still gets hairy in the details.

“The evidence from pioneering States suggests that there are regulatory complexities associated with the mainstreaming of community energy, which are not easy to resolve” – (Savaresi: 489)

Let’s take one example from Savaresi: capacity-building. The EU requires member states to provide support and because of all that market complexity, it’s sorely needed. But the kind of support a country can provide depends on its existing regulatory system. Thus, in Denmark and Germany, energy communities have been bolstered because of “extensive powers of local authorities in planning and public services”. In the UK, no such local powers existed, so instead authorities helped grow a new field of intermediaries. For the most part, their ties with communities are symbiotic, but at the same time, this system creates new dependencies and thus the need for more regulation to protect the dependent parties from potential abuse.

So, there we are. This is but a teensy tiny selection of the issues. It’s enough to deduce the moral of the story though: building a clean grid with ‘citizens at its core’ will be a fight in the worst of cases and a long road of two steps forward, one step back in the best of cases.

This blog post is an amended version of a piece originally written for the Social Life of Energy newsletter. It can be read at: https://sociallifeofenergy.substack.com/p/leveling-the-playing-field

Leave a Reply Cancel reply
Subscribe to our newsletter